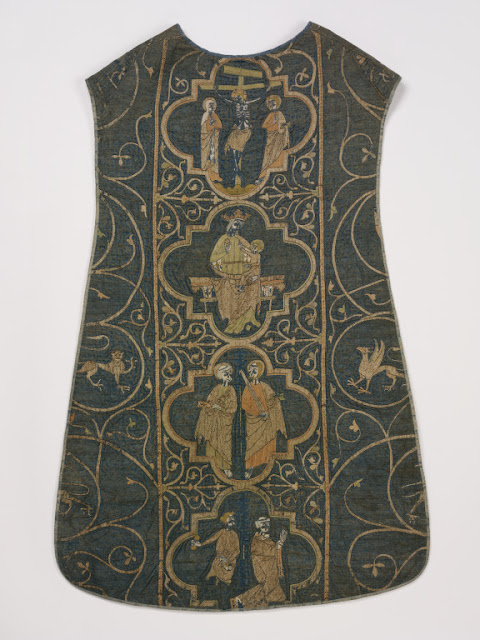 Clare Chasuble (1272 - 1294)
© Victoria and Albert Museum, London
It is Friday night at the V&A. The galleries are full of the bright young intelligentsia of London, a man who is the spitting image of Ai Wei Wei, and MrsM having a date night with MrM in the Opus Anglicanum exhibition.
The exhibition is awesome in the original 'full-of-awe' meaning of the word. Exquisite embroideries which have survived for hundreds of years, lustrous materials in rich colours, delicate shadings of thread, shimmering gold accents. Most of the extant examples are church vestments which have been protected by ritual use and careful storage in huge cope chests or buried as funeral garb.
Two of the bright young things are walking around just in front of us and they stop in front of the Clare Chasuble and exclaim "This fabric came from Iran! In the thirteenth century! Isn't that absolutely mind blowing!" Everything about this chasuble is extraordinary: the blue-green satin fabric which must have travelled from Iran to England, the vibrant colours and sinuous silver embroidery, the lively characterisations of the figures, and the fact it has survived for over seven  hundred years.
It is almost certain that this chasuble was commissioned to commemorate the marriage of Margaret de Clare to Edmund, Earl of Cornwall in 1272. Margaret de Clare, aunt of Elizabeth de Clare who endowed Clare College, successfully sued for divorce in 1294 on the grounds of cruelty and then lived quietly until her death in 1312 when she was buried in Chertsey Abbey.

Many thanks to the fascinating Edward II blog for untangling the lives of the three Margaret de Clares.
Posted by alice c at 00:01