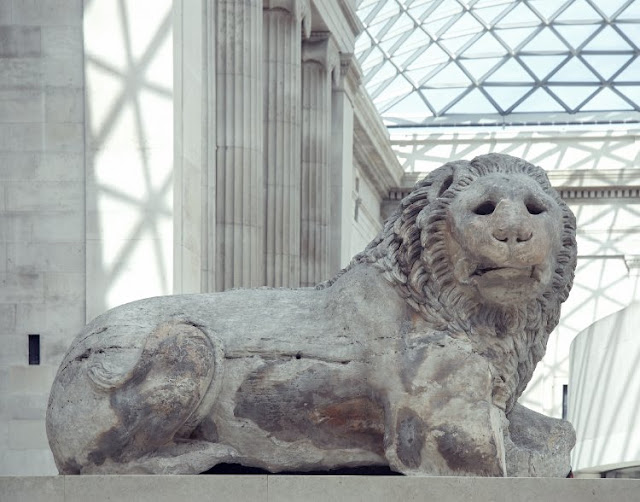 The Head of the Research Group is on the warpath after a recent visit to the British Museum.

"The labels on the displays are quite inadequate. I cannot understand it. There should be accurate geological details. Surely everyone wants to know the provenance of the materials. There are some rocks which are so characteristic that you can identify which quarry they originated from. Why is that information not on the labels?"

MrsM drafts a letter in her head

Email ThisBlogThis!Share to TwitterShare to FacebookShare to Pinterest
Labels: work 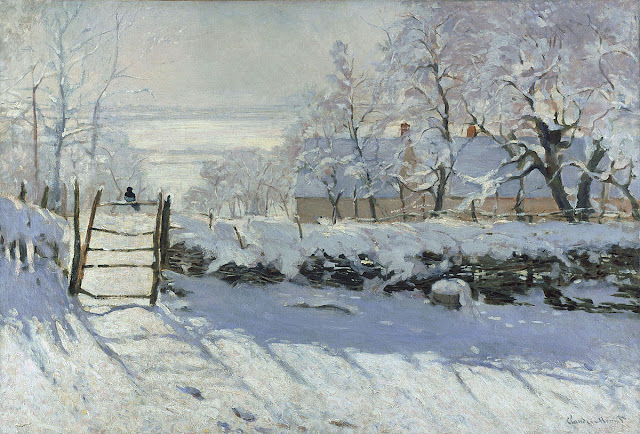 
"Stay Frosty" is the catch phrase of Claude Taylor, one of the tireless commentators on the #TrumpRussia Twitter campaign. It also seems sensible advice if you are in the U.K. for the next seven weeks.
Posted by alice c at 00:01 9 comments:

Email ThisBlogThis!Share to TwitterShare to FacebookShare to Pinterest
Labels: resilience 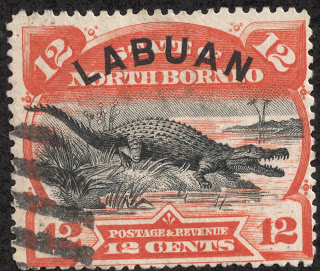 Busy, busy.
Things to do.
People to see.

MasterM could not join us at the picnic
because he was running a marathon.
Not just any old marathon
but up and down the coastal footpath
from Lulworth Cove to Shell Bay. 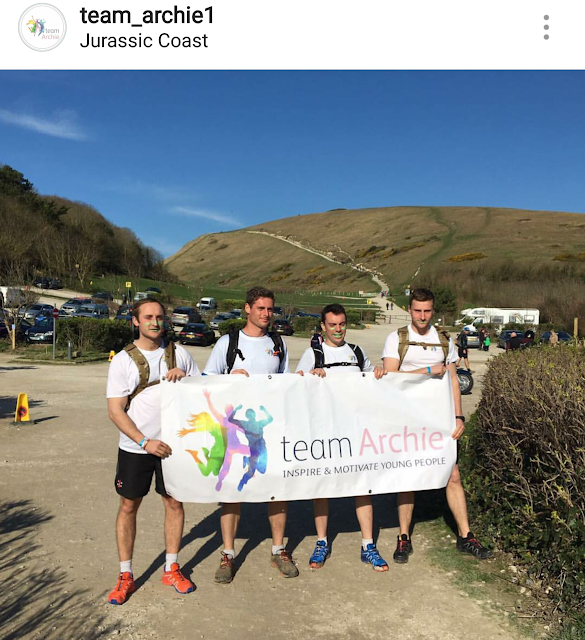 The Jurassic Coast Challenge is 120 km
from Charmouth to Shell Bay.
3 marathons in 3 days.
You have to be superfit to complete it.
MasterM ran on the last day
to support his friend
who completed all three marathons.

This is MasterM's pedometer for last week: 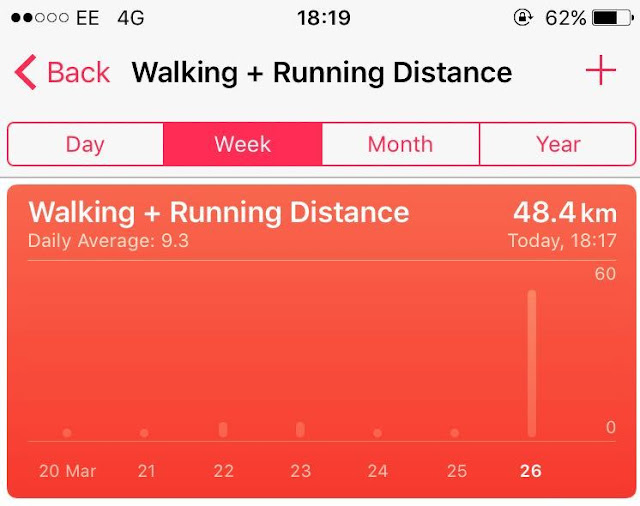 MasterM has never run a marathon before
but, as you can see from the pedometer,
he thought he was already fit enough.
He won't make that mistake again! 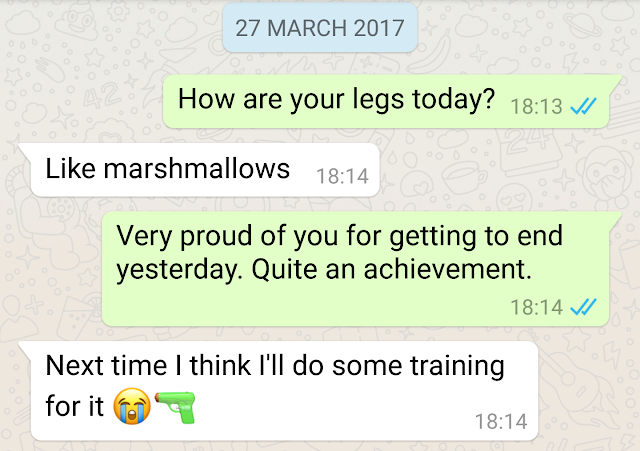 It was all in aid of teamArchie,
set up in memory of Archie Lloyd,
inspiring and enabling young people,
helping them to fulfill their potential.
Posted by alice c at 00:01 7 comments:

Email ThisBlogThis!Share to TwitterShare to FacebookShare to Pinterest
Labels: MasterM 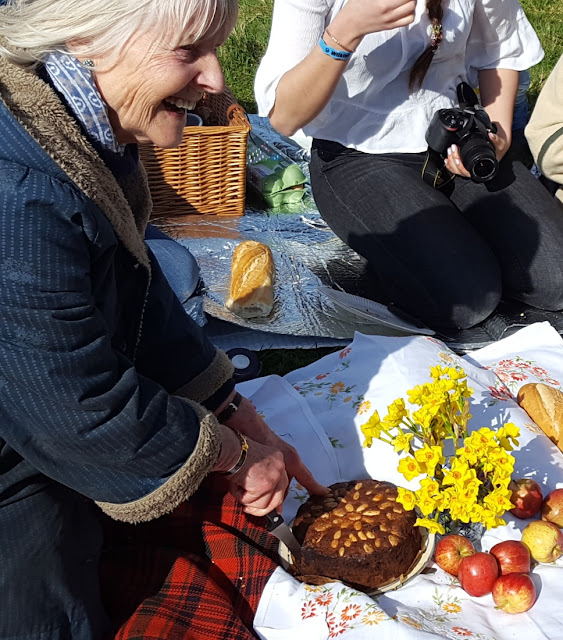 When I tentatively suggested a big family picnic at Brentor on Mothering Sunday my brother and sisters got very excited and the whole project snowballed. I spent a lot of time imagining all the things that could go wrong but I shouldn't have worried - my family are picnic pros.

Five cars filled with aunts, uncles, cousins and grandparents arrived at Brentor at the same time, a small miracle because one family drove up from Penzance and another family came down from Bristol. My father was given the task of scouting out the best place to sit and we all followed with armfuls of rugs, picnic hampers bursting with goodies and enough thermos flasks of coffee to set up a cafe.

We sat in the warm sunshine watching boy cousins climb on the rocks and girl cousins demonstrate their gymnastic prowess, sharing memories and enjoying each others company. Everyone had brought their favourite picnic food to share and so there was a feast of spinach quiche and salad, pasties, pork pies, baguettes and cheese, crunchy apples, flapjacks and party rings. At the end my mother cut her famous Dundee cake and for a happy moment it felt as though we had slipped back into our childhood.
Posted by alice c at 00:01 6 comments: 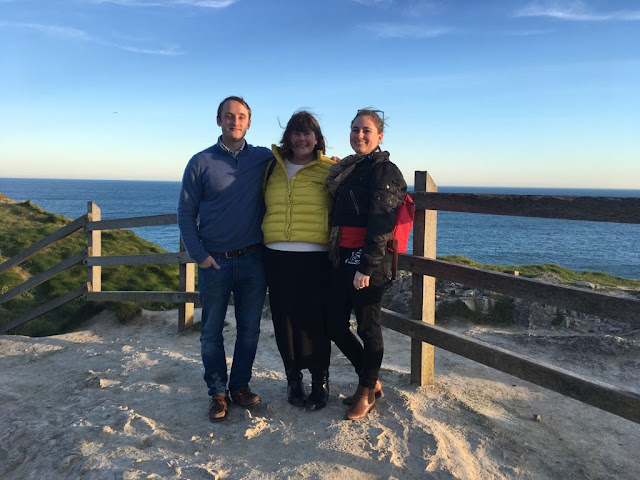 When your children are adults
the best gift of all is
presence.
Posted by alice c at 09:20 9 comments: 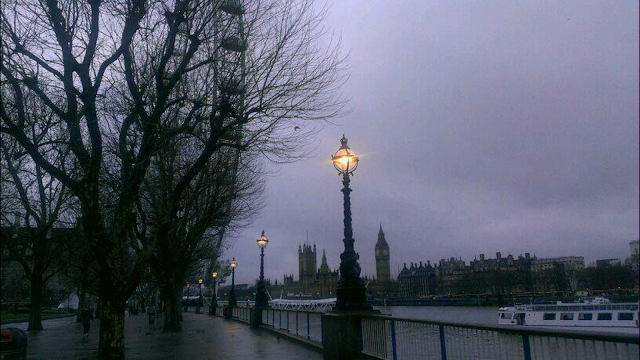 I arrived at London Waterloo yesterday afternoon intending to walk to the National Gallery in Trafalgar Square before returning to the South Bank to meet a friend and go to a concert in the Royal Festival Hall. It is a very pleasant stroll across the Jubilee footbridge looking down the river towards Westminster and I used to do it every day when I worked in London.

As my train approached the platform I could see that the entrance of St. Thomas's Hospital A&E was crowded with ambulances and police cars and that traffic was stationary on surrounding roads. The air was resonating with the sounds of sirens and helicopters and when I reached the South Bank I discovered that the whole site was taped off and that it would not be possible to walk across the river. Behind me a police van was shouting at pedestrians and telling them to clear the area.

These are the things that I saw and heard and my question to you is what would you do next if you were in my situation? Would you find another route across the river and continue with your plans for the evening or return to Waterloo, a crowded train station. How would you get information about the safest place to be?

I turned to Twitter and read on @BBCBreaking that the incident was in Westminster so my alternative route was out of the question. @MetPoliceUk were giving advice on roads that were closed and it was apparent that the incident was very serious with a large cordon around Westminster Bridge. There was no evidence of coordinated attacks in other parts of London but I checked @southbankcentre and saw that the site had been closed on police advice. @LPOrchestra quickly confirmed that the concert was cancelled and so I could make the decision to return home.

In contrast, my friend chooses not to have a smart phone or use social media and apps and I realised how vulnerable she has made herself by rejecting changes to the way that information is shared. She was dependent on other people before she could make decisions about the safest course of action and because reception for analogue phones is poor when everyone else is using their phones it was difficult for her to keep in contact.

1. You do not know when you will be in a fast moving security situation. It could be a train station, a concert hall, an airport, a shopping centre. Think about how you would access information to keep yourself safe. In my experience Twitter is the quickest way to get information from reliable sources so it is worth investing time to become familiar with how it works.

2. Always have a fully charged back up battery for your phone in your bag. If areas are cordoned off or transport stops you may be using your phone for several hours and your family will need reassurance that you are safe.

I hope that you are never in a situation where this advice is helpful but please be prepared so that you can make informed decisions and stay in touch with your family.

This post is dedicated to those affected by the incident at Westminster on Wednesday 22 March and to the emergency services for their work protecting the people of London.
Posted by alice c at 11:57 23 comments:

Email ThisBlogThis!Share to TwitterShare to FacebookShare to Pinterest
Labels: london 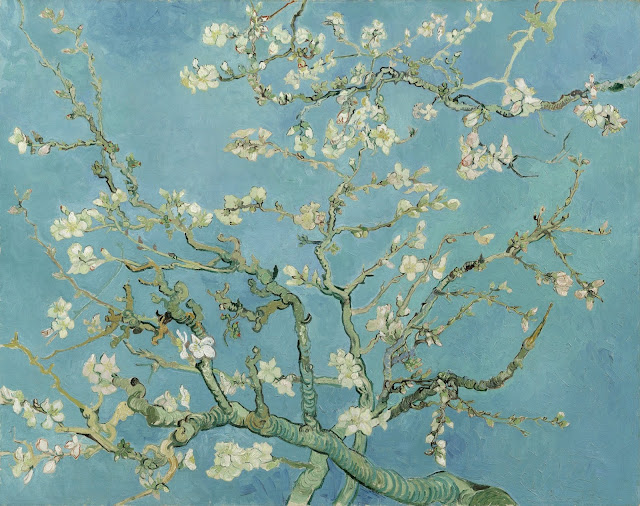 From blossoms comes
this brown paper bag of peaches
we bought from the boy
at the bend in the road where we turned toward
signs painted Peaches.

From laden boughs, from hands,
from sweet fellowship in the bins,
comes nectar at the roadside, succulent
peaches we devour, dusty skin and all,
comes the familiar dust of summer, dust we eat.

O, to take what we love inside,
to carry within us an orchard, to eat
not only the skin, but the shade,
not only the sugar, but the days, to hold
the fruit in our hands, adore it, then bite into
the round jubilance of peach. 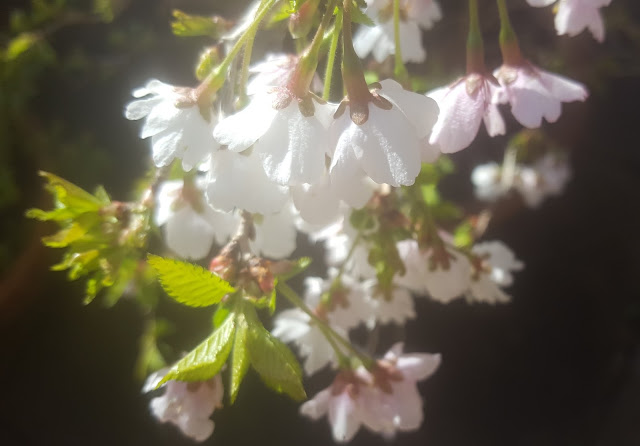 
I can highly recommend taking photos of your garden first thing in the morning. It improves the mood. Especially if it is sunny. But only if there is no one to scold you for letting your porridge get cold.
Posted by alice c at 00:01 4 comments: 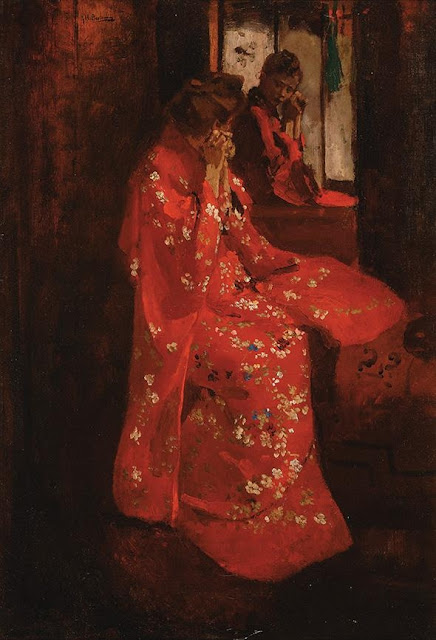 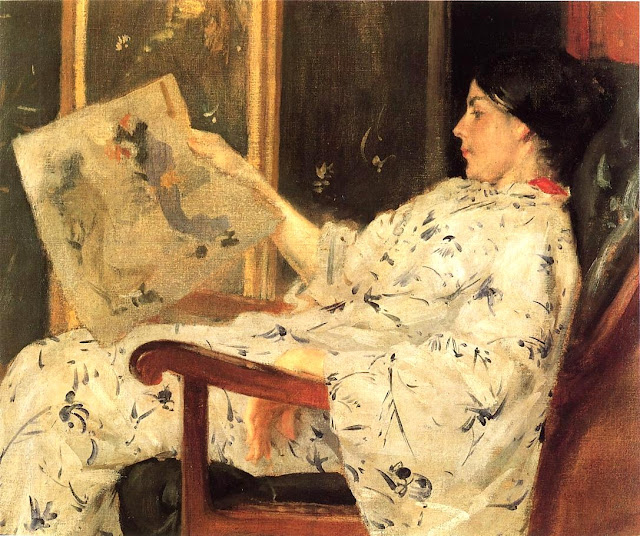 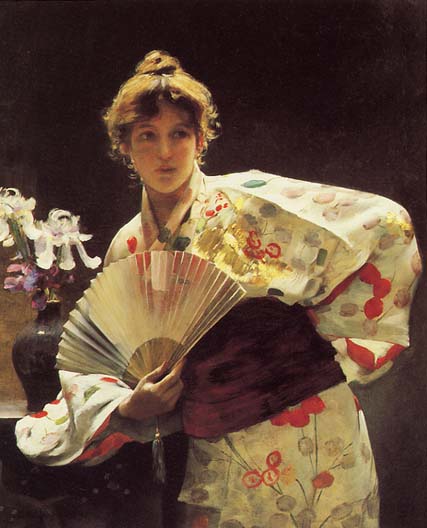 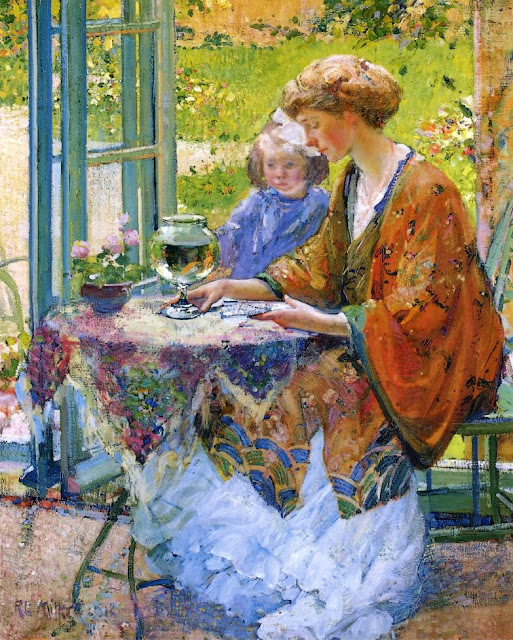 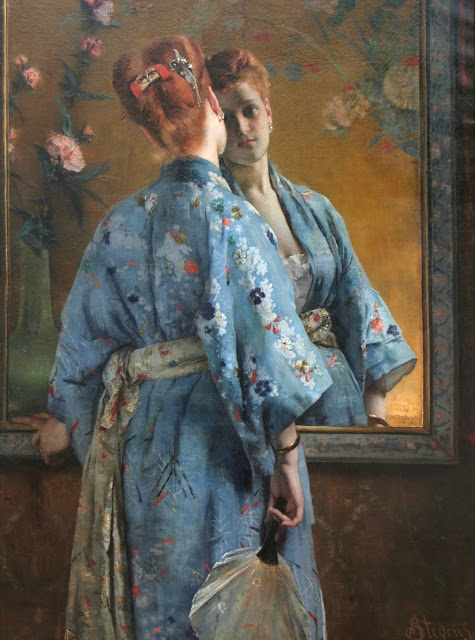 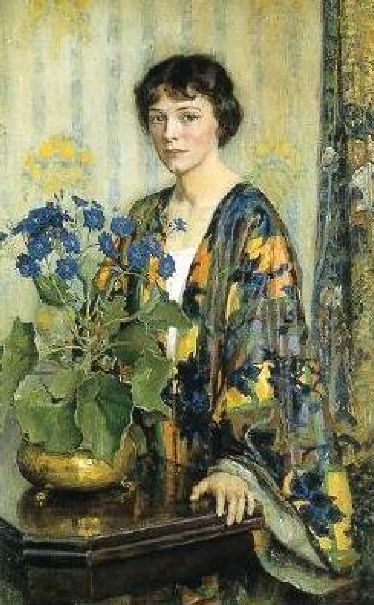 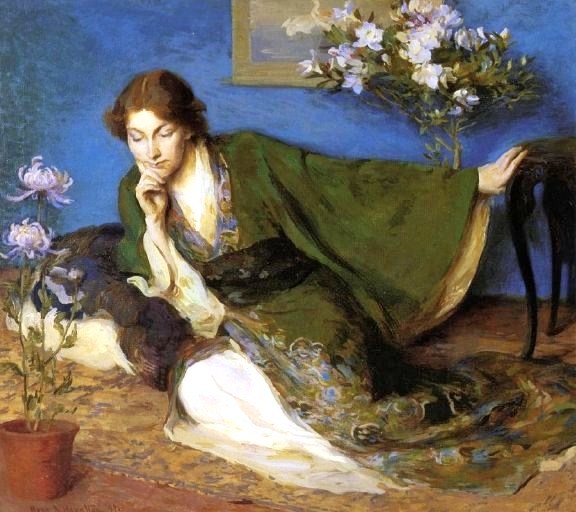 Woman in Kimono
Mary Brewster Hazelton
I will neither confirm nor deny that I have been researching antique kimonos with a view to purchase one of the aforementioned items. Any conversation that I might have had with MissM on the subject is entirely coincidental. Nothing can be inferred from the large number of images of kimonos on my laptop. MrM will testify that he is completely unaware of any intention related to imminent kimono purchase.
Posted by alice c at 00:01 10 comments:

Welcome! This is my record of the changing seasons, of plans, of success and failure.