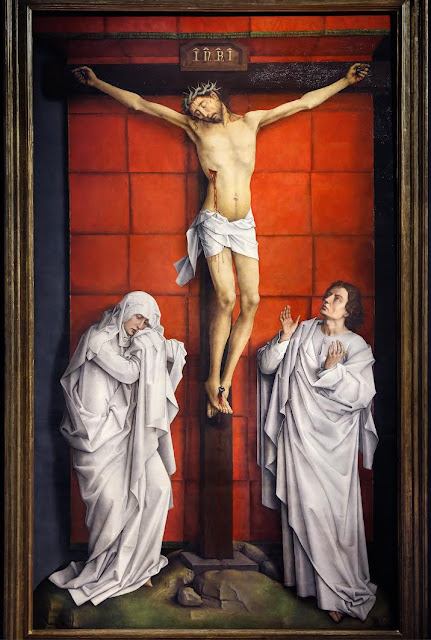 Earlier this month I was at the British Academy to hear the new Director of the National Gallery, Dr Gabriele Finaldi, give a powerful lecture on 'Rogier van der Weyden and the encounter between Faith and Art'.

It was intensely moving to hear Dr Finaldi speak about this medieval Flemish artist whom he has studied for many years and the room was silent as he explored the iconography of four paintings featured in the recent exhibition at the Prado Museum. Rogier van der Weyden was highly respected in his lifetime and was official artist for the city of Brussels from 1436 until his death in 1464.

The final image that Dr Finaldi chose was the recently restored masterpiece 'The Crucifixion' (1457-64) which was originally an altarpiece in the Charterhouse of Scheut. Dr Finaldi described standing in front of this painting for hours exploring every detail and I thought about contemplating such terrible suffering and overpowering grief over a long period of time and wondered if I would have had the strength.
Exhibition at Prado Museum 2015
Posted by alice c at 02:00