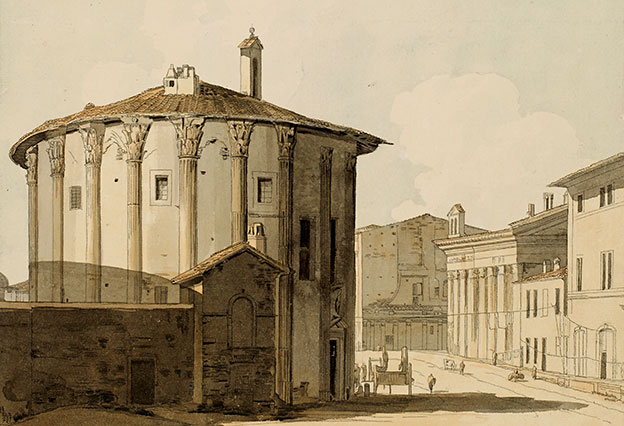 © Trustees of the British Museum


Francis Towne was a watercolour artist who lived in Exeter at the end of the eighteenth century but in 1780 he embarked on the great adventure of his life and set out for Italy. For the next year he painted the classical landscapes and architecture that he saw en route and particularly during his extended stay in Rome. The sequence of paintings was bequeathed to the British Museum but consigned to storage for over a hundred years until they were rediscovered. Francis Towne's paintings of Rome are on show until August and very lovely they are too - subtle shades, detailed lines and powerful compositions. This was a man painting as fast as he could, trying to capture everything that he saw in that one magical year before he returned to Exeter. It was moving to see that some of the paintings have finger prints at the edge where Towne has grasped them in his urgent need to capture a vista before the light changes. It made me realise how fortunate I have been to spend time in Rome and I long to go back to explore the city with a new perspective.
Posted by alice c at 02:00