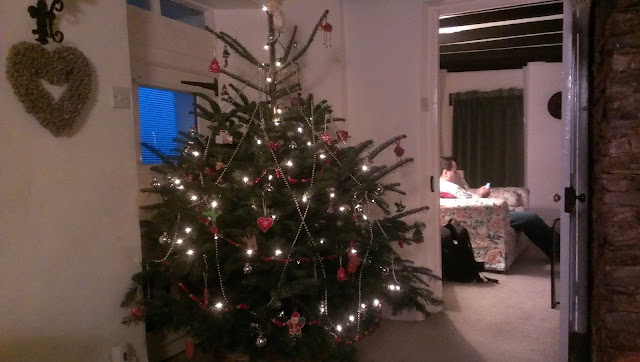 The Little Boy Next Door was not particularly impressed by our Christmas tree. He said that he had seen it before, last year. I was a bit downhearted because I had braved the scrum at the farm shop, selected the tree carefully and then trimmed the trunk with a saw so that it was exactly the right height but it is possible that the absence of presents underneath might have contributed to his ennui. However, The Little Boy was very impressed by the tiny tree beside our front door which has so many lights on it that it is unable to lift off in the gale force winds. I was slightly mollified when he said it was the prettiest tree on the village Christmas tree walk (which consists of our tree and a blue flashing bush on the other side of the square). Later we admired his own tree and agreed that it was the perfect size and that the tinsel and baubles were quite beautiful. I saw a stripy stocking hanging from a branch which was a gift from his teacher and obviously from the Little Cotton Rabbits pattern. I wonder how many other children will have happy memories of those tiny stockings hanging from the Christmas trees of their childhood.
Posted by alice c at 21:08