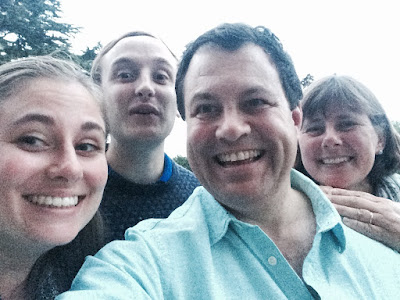 It was his birthday so we indulged MrM and allowed him to do a selfie with his crew. At first MrM was worried that he could only see himself but MissM pointed out that if he held the camera sideways and stretched his arm he could fit us all in. Afterwards MasterM wished that he had said "Marshmallow!" instead of "Popsicle!" and MrsM was very grateful that there was no evidence on her face of the chocolate tart she had just consumed but MrM was happy because everyone was in the photo.
Posted by alice c at 08:27